In 2017 four bridge clubs in South Notts – East Bridgford, Keyworth, Phoenix (Ruddington) and West Bridgford – discussed the future of their bridge sessions. Bridge is popular in the area but issues included declining numbers especially at some evening sessions and concern about lack of local provision for newcomers wanting to learn bridge. The four clubs decided to set up a joint project to run market and advertise bridge courses, and to establish supervised bridge sessions so that novices would be able to play bridge in a safe environment before migrating to full club sessions.

Armed with a £250 grant from their EBU County Association, and drawing inspiration from the Yorkshire membership campaign, the South Notts Bridge initiative kicked off with two open sessions where people could find out more and register for a course.

Over 70 people attended, 25 signed up for courses, and two-thirds of those are either now full club members or continuing on courses. 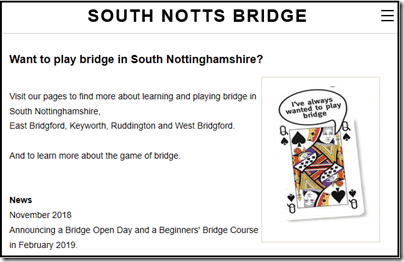 This is only the start, and a new course is starting this month. It has been hugely worthwhile, inexpensive in money terms, though requiring considerable effort from existing club members.