I travel a fair bit (not only for the EBU) and of course people I meet ask me what I do.

When I mention that I work for the English Bridge Union it often sparks a conversation about bridge. Twice in one week I chatted with people who would like to play more bridge but do not.

In the first case, the person used to be a keen bridge player but had drifted away from the game, being busy with work. He thought he might try to pick it up again and ventured to his local EBU club.

I do not know which club it was but he was thoroughly put off. He said it was made clear to him that bridge was played strictly by the rules and that any breaches would be properly adjudicated. I am not sure how the evening went after that, but he has no intention of returning.

In the second case, the person was a casual bridge player and would like to play more. She was thinking of joining a club but was worried that it would be too intimidating. I encouraged her to make an approach and see how it went.

My anecdotal evidence does not tell us how common these stories are, but I doubt they are all that unusual. What does this mean for bridge clubs that want to grow?

The first contact is hugely important. You may never get another chance. And the priority in that first contact is to make it apparent that newcomers are welcome, whether on their own or in a pair. Tell them how friendly the club is, how you (or someone) will make sure they can find their way around, that there are refreshments, that everyone enjoys their bridge and they will love it.

The welcoming culture has to pervade the club. This is hard to do. Some people are unintentionally gruff or come across that way at first. We don’t all have fantastic people skills. There is a lot you can do though, especially if you are the director or on the club committee. Keep your eyes open; if someone is new, make a point of meeting them, chatting, and ensuring there is nothing they are worried about. If you are directing, name the newcomers and say how welcome they are before play begins. If there is an infraction involving the new person (and yes, EBU clubs do play by the rules), direct with a friendly manner and explain that adjudication is about making the game fair for everyone and not (in the vast majority of cases) punishment for wrongdoing.

Whether one person or one pair does or does not join your club may not seem all that important. Think of it another way though. What is the significance of being known in your community as a friendly and welcoming place to play bridge? That is huge.

A cheerful bridge club: is that so hard? Illustration by Audrey Quinton of Thorpe Bay Bridge Club, Essex

It is a year since I started working on membership development at the EBU. This is a long term effort, but I would like to share a little about how it is going, and what we have learned about how to increase membership at bridge clubs.

One of the thing we have worked on is improving our knowledge of what is happening by studying the data we have. In fact our data on membership as such is not very accurate, partly because it depends on how quick clubs are to update their records, and partly because we care more about bridge activity than we do about the number of members as such.

I am also aware that growing bridge clubs are the outcome of a lot of hard work. The demographics of bridge mean that many elderly members leave us each year, and that is not going to change. So to grow means to more than compensate for that natural process. 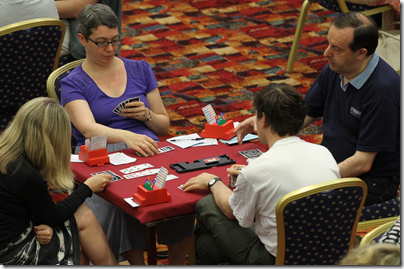 How to grow your bridge club – attracting people in

What then is the secret of a growing bridge club? There are really two aspects to this. The first is attracting people in. Since there is a limited number of experienced bridge players out there, most of whom already play in bridge clubs because the game is so fantastically absorbing, the best way to attract new people is to offer bridge teaching. Not every club can do this on their own, and there are often issues about finding a suitable location for clubs who do not have their own premises, but it is worth the effort.

In this it is essential to plan the progress of novices from learning the game to joining a regular club session. We have several posts on this site devoted to this topic.

How to bring new members into club sessions

How to migrate new players to the main club session

The key is to plan from the beginning and make sure that the club or clubs manage the lessons and follow up, rather than delegating this entirely to, for example, a bridge teacher. Another key is to avoid creating a club within a club: supervised sessions are for helping members to progress, not a final destination.

Once you have a plan in place it is time to do some marketing, and again there is plenty of information on this site on the topic, such as How to run a bridge taster session.

It is common sense yet something that is easy to miss: a club is much more likely to grow if it runs sessions that everyone enjoys. The best marketing is word of mouth, and if a club’s members say to their friends what a lovely bridge club it is, half the work of gaining new members is done already.

The opposite is also true. If a club develops a reputation for “unfriendliness” or the word goes round that “you have to take your bridge really seriously,” then gaining new members is an uphill battle.

At the EBU we are determined to change any idea of EBU clubs being unfriendly into the opposite, that at an EBU club players of any standard are assured of a friendly welcome.

What can a club do in order to provide an enjoyable evening? Quite a lot. The directing is key, so is the hosting, or making single players welcome. We also want to encourage more multi-standard sessions, which means making sure that your top players (as well as all the others) practice best behaviour with opponents of a lesser standard: a smile, patience with inadvertent errors, and never ever trying to take advantage other than via bidding and playing to the best of your ability. There is a post on creating a novice-friendly culture in your bridge club.

In my year at the EBU I have seen plenty of evidence that where bridge is carefully promoted by novice-friendly clubs, growth does take place. There is effort involved, but the rewards are also great, not only in terms of ensuring a bright future for your club and for the game, but also in the social and community benefits of bridge, a partnership game that is endlessly varied and rewarding.