The bridge world has been shaken to its roots by the COVID-19 pandemic with most of our clubs (there are a few brave exceptions) unable to meet face to face since the second half of March this year. That said, the response of the bridge community has been energetic and heartening, with many players refusing to give up their enjoyment of this greatest of games. Clubs swung into action, setting up online bridge sessions and encouraging their members to take part. Online platforms have greatly improved since lockdown began, starting with our EBU virtual bridge clubs on Bridge Base Online (BBO), enabling all our clubs to play sessions with just their own members, and continuing with developments like Bridge Club Live creating new club-only sessions and new entrant RealBridge offering video and audio at the table to recapture more of the social element in an online context. 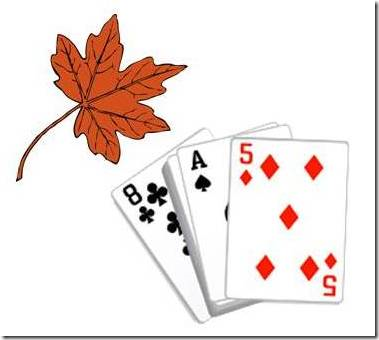 These efforts and innovations mean that the amount of bridge played by our clubs is around 60% of what it was before lockdown, which considering the challenges we faced is an amazing achievement. There are so many stories that it is hard to pick just one; but a great example is what has happened at Stretford, a long-established club near Trafford in the Manchester area. Soon after lockdown kicked in, club secretary Dave Tilley realised that something had to be done, not only for his own club, but also for Warrington south-west of Manchester (where he also plays) and Brierfield to the north. “I set about getting the three clubs together,” he told me, “to work as a virtual bridge club.” He took advantage of the EBU virtual club scheme and the results have been fantastic. Monday afternoon, 9 or 10 tables. Monday evening, 18 tables. Friday evening, 12-15 tables. Sunday morning, 11-15 tables. Bridge teaching is also continuing, with Thursday morning lessons followed by 12 boards of play. 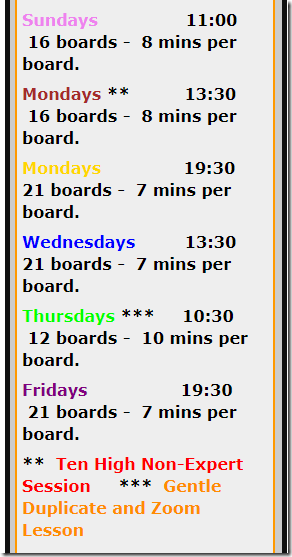 It’s notable that Dave, ably assisted by others from the three clubs, has introduced variety in the sessions to suit different standards. The Monday afternoon bridge is for 10-high in NGS terms, meaning that members can play there without having to face the most expert opponents. He has also worked hard to maintain a friendly atmosphere. You might imagine that this is difficult to do in an online context, but there are some similarities with face to face bridge, in that the way sessions are directed and the interactions with the players create an atmosphere and keeping this friendly and welcoming improves everybody’s enjoyment.

Dave is also aware that even when we are able to play in physical premises once again (which we all look forward to doing), it will not be the same as before.  “I actually think that clubs will probably function better still having some sort of virtual bridge in their lives,” he said. As an example, he told me that prior to the lockdown, there was no bridge anywhere locally on a Friday evening, other than a small session at Trafford which attracted 3-5 tables. Now, “we’re getting 15 tables on a Friday night,” he told me. Online bridge does have advantages: no travel on dark winter nights, available to people who cannot easily travel, home comforts while you play. It will never replace the face to face experience, but alongside it, will continue to play a bigger role than before.

As I write a further tight lockdown has been announced in England and it does not look like we will be back at our premises in the near future. While the surging online activity is encouraging, we also have to recognise that many people have NOT yet found a way to play online, and many clubs have in effect closed their doors. Our figures tell us, in fact, that while on average the people who play online are playing MORE bridge than before, this is balanced by the fact that more than half our members are not playing in EBU sessions at all. While recognising then the wonderful achievement that the hard work of the bridge community has achieved, it is also obvious that we have more to do.

One of the things we have learned from experience so far is that many of our members want to continue playing with their friends – not in bigger or more general sessions that have been made available. This means there is huge advantage for clubs in putting on club sessions which are more like the old face to face experience. Many clubs have done this, but many more have not, which means there is still plenty of opportunity to do so. We can think of club members as in three groups:

1. The keenest players. These members were quick to move online if they were not already there, playing in the EBU’s general sessions on BBO, in new county competitions, or wherever they could. Although in general this is a good thing, it has had a side-effect in some cases of drawing those players away from their home club and they may now need to be encouraged back.

2. The middle ground. These members are not so keen that they have sought out online bridge, being held back by various factors. Some may not be confident with the technology of playing online. Some will happily play with their familiar club members, but not in bigger groups where there are many they do not know. Some want to play more gentle or slower-paced bridge than the typical online environment allows. What these people have in common is that they respond well when invited to play online with their club, especially if there is help available with working how to log in and get started with bridge on their computer or tablet. Payment can be a point of friction; some are understandably cautious about handing over credit card details to an online provider. Clubs may be able to help by being a trusted intermediary, collecting payments and passing it on the online platform (the details of what is possible vary from one platform to another).

How many are in that third group? Some, but our impression is that this is a minority in most clubs. There seem to be a lot of members in the second group though – they will enjoy playing but only as part of their club and in club sessions. This is a great opportunity for clubs who are not currently playing online. Rather than saying “we are closed”, they can try running online sessions and invite all their members to take part.

Of course even this may be out of reach for the smallest clubs, in which case the next best thing it to get together with another geographically nearby club. This will be much more familiar than playing with complete strangers.

We believe bridge is a great activity to keep us cheerful in difficult times and we want as many of our clubs and our members to be playing as possible. If there are things we can help with, like how to choose an online platform, or how to find a director, or other issues, please get in touch with myself Tim Anderson or club liaison officer Jonathan Lilycrop and we will do what we can to advise and assist.