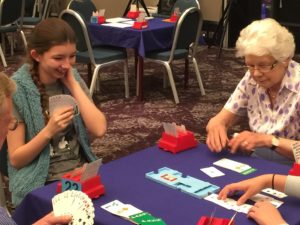 The EBU’s drive for new membership began in earnest in 2017 by supporting a pilot scheme in Yorkshire. A sub-committee of the county association was formed to manage a membership campaign across the county, and David Guild (former chair of the Olicana bridge club in Ilkley) was appointed as Regional Development Officer. His role, agreed by a small management committee of which he was part  was to encourage clubs to initiate membership campaigns. It was one that he took up with skill and vigour. Costs were shared three ways, between the EBU, the county, and the clubs where campaigns took place. In addition, there was a contribution from the European Bridge League (EBL). Today David reports that of 34 clubs, 20 took part in a membership campaign and 18 had good results.

Participation in a campaign essentially means actively promoting a club to the local community, including running bridge teaching and providing gentle improver sessions so that novice players are able to progress gradually towards being able to play in a normal club session.

Previously Yorkshire had created a website, which is still very active at http://learnbridgeyorkshire.co.uk/, forming a central point of contact where anyone in the region could find out how to learn the game.

It is not the EBU’s intention that clubs should run membership campaigns for a year and then stop. Rather, it is about transforming clubs into places which enjoy a regular flow of newcomers, at all levels of ability, so that bridge will continue to thrive.

In the light of Yorkshire’s experience, the EBU under the guidance of board member Ron Millet, and with strong support from Chief Executive Gordon Rainsford and others, is encouraging other regions to run their own marketing campaigns. The EBU has appointed a Membership Development Officer (MDO), Tim Anderson, to move this forward.

In essence, the EBU has come up with an offer to counties or regions which looks like this:

What about clubs who want to run membership campaigns, but are not part of a region-wide effort? In this case of course we will do our best to support them, but the full benefits and 50% funding will not be available.